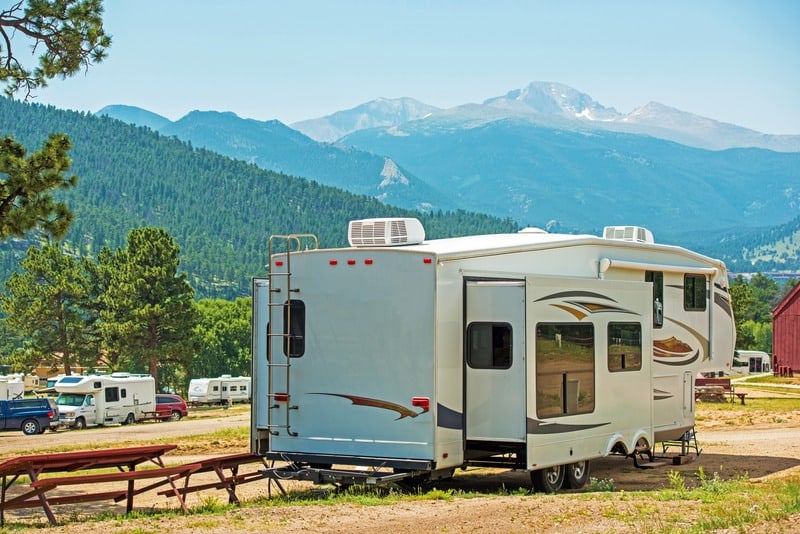 Fifth wheels look fascinating and grab the attention of many campers. However, there are some differences between them and your average RV.

Knowing the difference is important for maintaining yours or, if you don’t already have one, buying one!

A fifth wheel is a camper trailer connected to the bed of a truck with the help of a hitch. The fifth wheel hitch is a flat, large plate similar to that of a horseshoe.

Fifth wheels support a design that allows them to carry much heavier loads than regular ball hitches with the help of a very robust attachment system known as a fifth-wheel trailer hitch.

Its design is sturdier, with the front edge of the trailer extending over the truck’s rear bumper. Instead of attaching to the rear of the vehicle, this hitch is in the truck’s bed.

If you hire a professional to install it correctly, the trailer’s weight would be pressing down between the rear axle and the cab of the pickup.

The balanced weight distribution and pressure allow the truck to carry significantly heavier weight or a much larger trailer.

How Does It Work?

The metal rail running beneath the hitch attaches to the truck’s frame, adding strength.

The trailer connects to the hitch through a kingpin, a downward-facing pin, and a plate that rests on the top of the hitch plate.

The kingpin locks into the position within the hitch, so it can pivot to accommodate any movement or turns.

2. Why is it called the Fifth Wheel?

The fifth wheel gets the name from its original design.

When there were horse-drawn wagons and vehicles for transportation, a horizontal wheel was forged to be placed at the rear frame structure of the cart.

In the 1850s, Edward and Charles Everett, Quincy, Illinois, patented a type of the fifth wheel, followed by Gutches’ metallic head block and wheel in 1870 and Wilcox’s fifth wheel in 1905.

It was the same time around the early 1900s when manufacturers adapted versions of these wheels to go with motor vehicles.

3. Benefits of the Fifth Wheel:

Instead of being single units like a motor home, these fifth wheels are two separate entities.

They encompass a towing truck and a fifth wheel unit, joined together to accommodate numerous purposes:

The fifth wheel hitch is placed right above the truck’s axle on its bed. This placement allows an even distribution of weight on the towing vehicle.

It allows you to take turns and maneuvers without any stress. Even the people in the trailer can move around comfortably due to the stable movement and steady connection.

The even weight spread allows the trucks to carry much heavier trailers with ease.

As space generally occupied by the engine and other machinery is vacant in these trailers, it provides room for numerous alternatives.

No other vehicle offers as much room as the fifth wheel does.

You can also stock up the gas so you don’t have to stop several times. Just fill-up the tank on a long, wonderful trip.

Another considerable benefit is a substantial sleeping capacity.

The more beds you can accommodate, the more people you can entertain for a comfortable sleep.

This enormous sleeping capacity can be your ultimate choice if you have a large family. Mostly, large families use the cab above the truck bed as a bedroom!

You can also factor your fifth wheel’s extra storage capacity into having a toy hauler.

Toy haulers are the campers that have a garage in them. It allows you to cart around another off-roading vehicle or a small UTV in the back of your trailers.

Cost Reduced: Maintain One Vehicle Only

You can’t use your recreational vehicle to move around your hometown. You need to have another car to help you manage your local endeavors.

You don’t need to invest in a second vehicle when you have a fifth wheel.

Just detach the trailer, park it somewhere safe and use your truck as the second vehicle you need for regular use!

You don’t need to maintain two cars and ultimately save both time and money.

Although fifth wheelers come with various benefits, there are some shortcomings as well.

Let’s discuss some of these:

Generally, for 7,000 pounds of weight, you should invest in a medium-duty truck.

You must know if you’re planning to haul a massive trailer with your truck, you can’t just buy any regular vehicle. ‘The heavier the trailer, the larger the truck,’ it’s as simple as that.

However, you plan on investing in an even bigger and heavier trailer; you may need to get a one-ton vehicle.

If you seek quality time while traveling with your whole family, then fifth-wheelers may not be a suitable option for you.

You won’t be able to indulge in casual discussions, taste the food cooking in the RV’s kitchen immediately, or even ask for a water bottle unless you stop and access the travel trailer.

Moreover, switching seats with your partner while going along the road is impossible in a fifth-wheeler. It’s a luxury only motor homes offer.

You would require taking breaks for food and any other business while driving a fifth wheel, which is not very time-efficient if you are off to a very long route.

The extra-large space you enjoy while on your vacations eventually demands the same back from you. When not in use, you have to park your camper somewhere safe.

Now we know, arranging a place big enough for such a large vehicle is not easy. Even if you manage to arrange such a spot for your camper, another issue arises.

This difficulty is towing it to the desired location and parking in such a position, making it easy for you to detach and attach the fifth wheel back later.

Considering the cab takes way more space than any other regular hitch. Motorhomes being single pieces, are comparatively easy to manage.

If you think storing your fifth wheel is something you can’t manage, then I would suggest you look for alternatives that suit your requirements and resources.

Our Love for this stuff unfortunately does not pay the bills. We are supported by our audience. When you purchase through links on our site, we may earn an affiliate commission. This does not mean your purchase price will be higher. In some cases it could be lower do to our relationship and volume with the merchant. So shop with confidence, you are getting a good deal!

We Participate In The Amazon Services, LLC Associates Program, And Affiliate Advertising Program Designed To Provide A Means For Us To Earn Fees By Linking To Amazon.Com And Affiliate Sites.

ENTER TO WIN ONE OF OUR FREE GIVEAWAYS!

Thank you for visiting our site!

To show our appreciation we would like to offer you a spot on our list of FREE GIVEAWAYS.
We give all of our reviewed products away once the review is complete.

All giveaways are AS-IS. Shipping to be paid by the recipient.